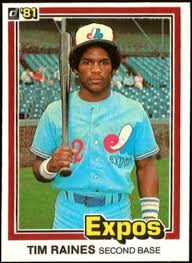 Don’t be confused by its drab, almost amateur appearance.  Simplicity, quirkiness, and historic value make 1981 Donruss Baseball one of the most significant and fascinating sports card sets ever produced.

The 1981 Donruss Baseball Card set was the first complete set since the early 1950s not to bear the name Topps.  For the first time since 1955, more than one company was producing extensive sets representing major league players.  A legal decision in the fall of 1980 gave both Fleer and Donruss the legal right to produce cards. The verdict cleared the path for Upper Deck to enter the fray and revolutionize the hobby with its premiere baseball card set in 1989.

Fleer and Donruss finalized their deals with the Major League Baseball Players Association in September 1980, leaving just five months to produce and deliver cards to stores by the last week of January 1981 to compete directly with Topps.  Gathering

photos, matching players with photos, writing informational blurbs, and proofreading statistics, proved to be a daunting task for companies producing baseball cards on a grand scale for the first time.

There has been interest in both the error and corrected versions for nearly three decades because both versions are more limited than the other cards in the set.  The 1981 Donruss series has also kept the growing number of baseball historians and “oddball” card collectors entertained over the years.

Tim Raines’ induction into the Hall of Fame has given the 1981 Donruss Set a recent spark.  Although Donruss somehow skipped over National League Rookie of the Year Fernando Valenzuela that year, it was the only company to picture Raines by himself on a rookie baseball card. Topps featured Raines with two other rookies on a prospect subset card, while Fleer swung and missed altogether.  The series also includes rookie cards of Jeff Reardon, Mookie Wilson, and Toronto Blue Jays infielder Danny Ainge before he became a three-time championship winning guard and executive with the Boston Celtics.

Rushing into the production of the 605-card 1981 Donruss Set also caused collation and printing issues.  Factory sets were not produced.  Instead, hobby dealers had to buy wholesale from TCMA, Donruss’ exclusive hobby distributor.  Cards of each player were shipped to dealers in 100-card lots secured by rubber bands. The cards then needed to be hand collated. The collation of wax packs caused further problems for collectors.  Several of the same card were often found in a single wax pack, which was great news if the card featured Hall of Famers Carl Yastrzemski or Johnny Bench.  Not such good news if the Leo Sutherland card was the featured player.

The cards bend easily and show tremendous wear over time due to flimsy paper stock.  The lackluster design consists of predominantly blurry portrait or posed photos against mostly empty stadium backdrops.  Time constraints prevented Donruss from airbrushing uniforms or caps. Players changing teams during the offseason appeared in their former uniforms with the name of their current team displayed across the bottom of the card.

Donruss also had considerable trouble securing player photographs. Ray Burris was traded by the Cubs to the Yankees who later sold him to the Mets during the 1979 season.  Although he hadn’t played for the Cubs in nearly two years, Burris sports a Cubs uniform on his 1981 Donruss card. Many of the pictures were taken in Wrigley Stadium or Comiskey Park by amateur photographers as Donruss scrambled to put together a set.  A handful of photos were taken by political and sports commentator Keith Olbermann, then a 21-year-old photographer with a passion for baseball.

Although limited in value, the 1981 Donruss Set has its own charm with an array of hard-to-believe mishaps and a unique history.

Happy birthday to Red Sox great Carl Yastrzemski, who turns 77 today. A leader in virtually every major offensive category in Red Sox history, the man they call Yaz is still one of the franchise’s most popular players.

Revered for playing the lead role in the “1967 Impossible Dream” season, Yaz became baseball’s 14th Triple Crown winner, while leading the Red Sox to the American League Pennant. Powering the Red Sox from last place in 1966, Yaz hit .326 for his second batting title, tied Harmon Killebrew with 44 homers and drove in 121 runs. Yaz capped the season off with 10 hits in 13 at bats.

Upper Deck commemorated the historic feat with the 2007 UD Premier Stitchings “Triple Crown Commemorative Patch”. The card back salutes Yastrzemski’s three AL batting titles, six gold gloves, 18 All-Star Games and his 1989 Hall of Fame enshrinement. Limited to a production run of 50, this popular Yaz item is a great buy for $20.

In one of the greatest seasons ever for a Red Sox player, Yaz led the team to the World Series and bolstered his Triple Crown numbers by pacing the AL in runs, hits and total bases. Over his 23-year-career, Yaz collected 3,419 his, 1,844 RBI, 452 homers — at a time when 400 homers was an accurate benchmark for a top slugger — and seven gold gloves. The 18-time All-Star was inducted into the Baseball Hall of Fame in 1989 on the first ballot.

Yastrzemski’s 1960 Topps rookie card, part of the Sport Magazine “Rookie Star Subset”, sells in the $160- $180 range. Print marks on some copies — a problem throughout the 1960 Topps series — limits the number of truly mint Yaz rookies. The only other major rookie card of the set belongs to Willie McCovey. Finding a well-centered Yaz or McCovey rookie is a daunting task. The popular 1967 Yaz card is a great buy for $18 in excellent condition.

With each passing season the legend of Yastrzemski’s accomplishment grows. Only 15 players have had Triple Crown seasons — Miguel Cabrera joined the select group in 2012 — with Rogers Hornsby and Ted Williams each achieving it twice. Former Red Sox Slugger Jimmie Foxx slugged for the Triple Crown in 1933 while playing for the Philadelphia Athletics.  Baseball immortals such as Hank Aaron and Willie Mays didn’t do it. Babe Ruth came close in 1924, leading the AL in batting and homes, but losing the RBI title to Goose Goslin.

Alex Rodriguez and Barry Bonds have led their respective leagues in all three categories, but never in the same season. In 2006 David Ortiz was first in the AL in homers and RBI, but hit just .287. With more and more batters specializing in either hitting for batting average or power, a Triple Crown winner in the near future is becoming less and less likely.