Preaching the need for a true ace to build a contending team, new Red Sox baseball czar Dave Dombrowski responded quickly by signing David Price to a long-term deal during the off season. Price is a genuine, front of the rotation ace — clearly one of the game’s top five pitchers. His resume includes a Cy Young Award and two runner-up finishes to go along with two ERA titles.

The first Price baseball card in a Red Sox uniform is from the 2016 Topps Heritage series, which features the design from the classic 1967 Topps set. The design combines a large player image with a minimal design, making the players the main focus of the set. The design concept made 1967 Topps one of the most popular sets from the ‘60s.

Responding to consecutive last place finishes, the Red Sox get left-handed Price at the peak of his career and durability has never been an issue. He has had only one minor injury in his career, sitting out six weeks in 2013 because of a sore triceps muscle. Price has also been transitioning from a power thrower to a more complete pitcher over the last few seasons. While maintaining a mid-90s fastball, Price has become more reliant on curveballs and changeups, which should limit the wear and tear on his arm.

Price, a standout pitcher at Vanderbilt, first landed on the hobby radar in 2005 when he won two games for the United States National Team while tallying 39 strikeouts in just over 28 games. The following summer, Price led the United States to a gold medal in the World University Baseball Championship held in Cuba. In eight starts for the US, Price was 5-1 with a miniscule 0.20 ERA. Price’s 2005 Topps Team USA card is a popular pre-rookie card readily available for $2. Certified Autographed versions limited to a production run of 475 are selling for $50. 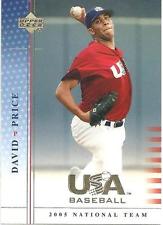 If there is any knock on Price it’s that his amateur championship success has not translated to playoff success at the major league level. Price is 2-7 — with both wins coming in relief — with a 5.12 ERA in 14 playoff games. At $31 million annually, the man signing the checks and the win-at-all-costs fan base will have much higher expectations over the next seven years.

Given the overall talent in the Red Sox organization, Price will likely have opportunities to improve his postseason record during the length of his contract. The Red Sox are hopeful Price will anchor an unsteady pitching staff, taking pressure off the inconsistent Clay Buchholz, rising star Eduardo Rodriguez and enigmatic veterans Joe Kelly and Rick Porcello.

A true workhorse, Price ranks fourth in the majors in innings and strikeouts, and third in wins since his first full season in 2010. He was arguably the AL’s best starter in 2015, posting an 18-5 record with a 2.45 ERA with 235 strikeouts in 32 starts for the Tigers and Blue Jays last season. Price finished second in 2015 AL Cy Young voting and has placed in the top six four times in his career, including winning it with Tampa Bay in 2012. His 2013 Topps “Chasing Cy Young” game worn jersey card is a nice pickup for $5.

Price, the top overall pick in the 2007 MLB Amateur Draft, has also had tremendous success against stacked AL East lineups of recent years past and is 6-1 with a 1.95 ERA at Fenway Park over his eight-year career. With the best defensive outfield in the league covering his back, Price has positioned himself well for continued success.

Now that Price is standing center stage in a big city baseball market for the first time in his career, expect increased demand in his autograph and game used memorabilia cards. Price’s 2009 Topps Finest “Letter Patch” autograph card (the patch was taken from his actual Vanderbilt baseball uniform) is selling for $325 and is on the rise. His first Red Sox memorabilia and autographed cards will be issued later this spring.