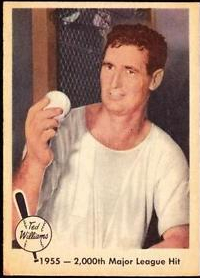 When Fleer entered the baseball card business in 1959, the rookie sports card manufacturer turned to the greatest hitter who ever lived.Ted Williams not only established new slugging standards, he also changed the way the sports collectibles hobby was marketed. 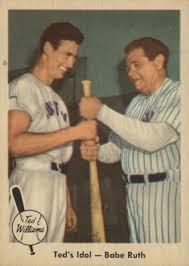 During this era, Topps was the exclusive baseball card manufacturer, so Fleer — the only other major trading card producer at the time — had to take a more creative approach with its products. Facing the daring task of going head to head with the mighty Topps Co., Fleer signed Ted Williams away from Topps. The result was 1959 Fleer “Life of Ted Williams” — an 80-card series capturing a medley of snippets detailing Williams’s legendary career.

One of the more popular cards in the set (#2) pictures Ted in his Red Sox uniform gripping a bat with his idol, Babe Ruth. The card back chronicles Ted’s time at Horace Mann Junior High School in California. Card #5 details Ted’s brilliant high school career for Herbert Hoover High School. He was considered one of the top amateur players in California, drawing the attention of big league scouts.

Card #14 highlights his amazing debut season (1939) in which he became the first AL rookie to lead the league in total bases. A favorite among collectors is card #41, which displays a head shot of Williams above the title “1941 — How Ted Hit .400”. The card back discusses how Ted played both games of a doubleheader on the last day of the season to raise his average from .400 to .406.

Defensive shifts have been the talk of baseball in recent years, but the first shift of consequence is chronicled by card #28 in the 1959 Fleer series. Conceived by manager Cleveland Indians manager/shortstop Lou Boudreau, the shift was first implemented in July of 1946 during the first game of a doubleheader. The overstacking of the right side of the field did nothing to neutralize Williams.  The Red Sox won the game 111-10, Williams hit three home runs, including a grand slam, and had 8 RBI. This is the first a baseball card dedicated to defensive alignment versus a particular player.

This set includes three of the hobby’s hardest-to-find All-Star cards. Card #34 pictures Williams sliding into second base in the 1947 All-Star Game. The card back details the new runs scored record established by Williams that year.

Card #40 shows Williams crashing against the wall to make a spectacular catch in the 1950 All-Star Game at Comiskey Park. The card back tells the story of how the catch destroyed the Red Sox Pennant hopes and nearly ended Ted’s career. Williams didn’t realize that he had broken his elbow and gamely played for 8 more innings, hitting a single and driving in a run.

Card #48 features Marine Captain Ted Williams throwing out the first ball and serving as an honorary member of the AL team at the ’53 All-Star Game in Cincinnati while still serving on military duty. The card back expressively reads, “Not only was he a baseball hero of the finest magnitude, but he was in two wars within the short span of one decade.”

The Williams set successfully put Fleer on the sports collectibles map, but not without incident. Card #68 pictures Ted preparing to sign a contract with Red Sox general manager Bucky Harris, who was one of the handful of baseball executives under contract with Topps at the time. Rather than face a lawsuit from Topps, Fleer withdrew card #68 by defacing the lower right corner of the card on the printing sheet, and then destroying the cards after they were cut from the sheet. A very limited amount of mint #68 cards were packaged before Fleer started its disfiguring process, making this one of the most sought-after Williams cards.

The back of the Harris card reveals just how much times have changed: “Ted signed his 1959 contract in Boston for a reported $125,000. He has been baseball’s highest paid player for several years.”

This affordable set details the extraordinary career of the legendary Ted Williams. Much of the history written about the Splendid Splinter came directly from the backs of these cards. Every card — except the Harris card, which commands $1,000 — can be had for under $20 in decent condition.

The 1975 Boston Red Sox and Cincinnati Reds team sets are absolute musts for 1970s baseball card collectors.  Not only did the two teams engage in one of the most memorable World Series to date, but the sets include some of the top players from the ‘70s — including Hall of Famers, the all-time hits leader, and two of the top rookies in Red Sox history.

After raising the price of baseball card packs from 10 cents to 15 cents, Topps was looking for a way to turn heads.  Collectors had been complaining for years that Topps baseball cards were becoming boring and monotonous. After featuring plain white borders in consecutive years, Topps broke out the rainbow for the 1975 series. Bright two-color borders with bold lettering turned out to be a one-year wonder. But the unique series stood the test of time, remaining one of the most memorable sets ever produced with some help from the  Red Sox and Reds.

Thirty-four-year-old Luis Tiant twisted and turned his way to a 6-0 victory in Game 1 of the 1975 World Series.  With his best days believed to be in the past, Tiant transformed from a power pitcher to a craftsman, offering an assortment of breaking balls and off-speed pitches that kept hitters off balance. With the DH shelved for the series, Tiant also picked up his first hit since 1972. His 1975 Topps card (#430) is a quick sell locally for $3.

Sparky Anderson’s Reds took three of the next four games to set the stage for Game 6, arguably the most dramatic game in World Series history.  The Red Sox took a 3-0 lead in the first inning when Fred Lynn homered into the Fenway bleachers following two-out singles to Hall of Famers Carl Yastrzemski and Carlton Fisk.  Graded versions of the ‘75 Topps Yaz (#280) and Fisk (#80) cards sell in the $25-30 range.

After batting .331-21-105, Lynn became the first Major League player to capture MVP and Rookie of the Year honors in the same season.  His ‘75 Topps rookie (#662) now sells for $6 in mint condition. Teammate and fellow rookie Jim Rice slugged .309-22-102 before taking an errant Vern Ruhle fastball off the wrist, ending the left fielder’s season in early August.  Elected to the Hall of Fame in his last year of eligibility in 2009, Rice continues to be a local favorite. His ‘75 Topps rookie (#616) sells for $9.

Ken Griffey Sr.’s two-run triple and HOF catcher Johnny Bench’s RBI single in the  fifth inning tied Game 6. Griffey’s ‘75 Topps card (#284) — often packaged on eBay  with Ken Griffey Jr.’s cards — sells for $3 as a stand alone. The Bench card sells for $25 in mint condition. The Reds took a 6-3 lead in the eighth following a home run  by Cesar Geronimo whose ‘75 Topps card can be found in the commons bin.  With two outs in the bottom of the eighth, Bernie Carbo drilled a Rawly Eastwick pitch into the centerfield bleachers to tie the game at six. Carbo has a bit of a cult-like following locally, inflating his ‘75 Topps card (#379) slightly above common status.

In the 11th inning with one out and fleet-footed Griffey on first, Cincinnati All-Star second baseman Joe Morgan slashed a sinking liner toward the right field ple. The  ball seemed destined to drop into the corner for an extra base hit that would have scored Griffey. With an instinctive over-the-head stab of the glove, Dwight Evans plucked the ball out of the Boston night.  He stumbled backward, regained his balance and threw to the infield to double up Griffey at first base.

With the tie preserved and the tension building, America was introduced to one of baseball’s greatest right fielders.  His ‘75 Topps card (#255) is a great buy for $2. Hall of Fame second baseman Joe Morgan accumulated two World Series rings and two MVP awards during a 22-year career. His ‘75 Topps sells for $4.

In the bottom of the 12th, Fisk sent a blast to left field.  The question: fair or foul? The ball ricocheted off the foul pole for the perhaps the most dramatic moment in Red Sox history.  The Reds would go on to win Game 7 to win the World Series, but the series — Game 6 in particular — will long be recounted by generations of Red Sox fans.  The Red Sox 1975 Topps team set sells for $50 in decent condition, while the Reds team set, which includes Pete Rose (#320), goes for $75.