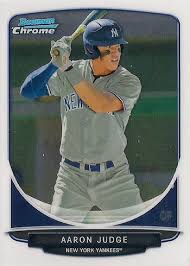 Nothing stimulates the hobby faster than two rookies from storied franchises slugging home runs at a record pace.  Aaron Judge and Cody Bellinger have arrived as baseball’s top sluggers and hobby treasures.  Both have a chance to join Fred Lynn (1975) and Ichiro Suzuki (2001) as the only players to be named MVP and Rookie of the Year in the same season.

On pace to become the first Yankee to win the Triple Crown since Mickey Mantle in 1956, Judge led the American League in homers (27), RBI (62), and hitting (.327) at the midpoint of the season.  The 25-year-old behemoth outfielder has given Yankees fans hope for the future and collectors excitement for the present.  The first Judge cards of consequence were released shortly after the Yankees selected him in the first round of the 2013 MLB Draft.  Because these cards were issued before Judge was on a major league roster, they are considered prospect cards or inserts. In today’s hobby, a star’s earliest cards outdo the rookie cards in significance and value.

The most sought-after card of the summer is the Judge 2013 Bowman Draft Pick, selling for $17 with the more limited chrome version selling for $50 and the even more limited Chrome Refractor version approaching $200.  The simple posed design against a white background is easily preserved and holds its value exceptionally well.  From the card back we learn that Judge was a First Team All-Western Athletic Conference selection all three seasons at Fresno State.  Not surprisingly, Judge was also the College Home Run Derby Champion in 2012 and played wide out on the prep football team.

Judge’s official rookie cards are found in 2017 packs.  His 2017 Topps card is the first to carry the official MLB “RC” logo.  Although the Topps set does not feature the glitz and glitter of the latest printing technologies, rookie cards from the Topps flagship are must haves for rookie card collectors.  The Judge rookie is selling  for $10 with limited Gold Parallel versions selling for $70.

Judge will likely destroy the Yankees record for home runs by a rookie (29) established by Joe DiMaggio in 1936.  As Judge’s name becomes synonymous with Yankees legends, interest  in his autographed cards will increase.  His 2013 Bowman Chrome Certified Autograph cards have sold for $850 in recent weeks with Refractor versions selling for $1,400.  His 2015 Bowman Inception can be had for a more affordable $125.

Twenty-one-year-old Cody Bellinger was called to the majors in late April due to a rash of injuries to the Dodgers outfield.  What appeared to be a short-term promotion became one of the best starts to a career in baseball history.  Bellinger’s league-leading 24 homers in 62 games are the most by an NL rookie in the first half of the season since 1933.

On Opening Day, most Bellinger baseball cards could be had for mere pocket change, today they are among the most coveted in the hobby.  Bellinger’s cards date back to 2013 when the Dodgers drafted him in the fourth round of the MLB Draft. One of the earliest Bellinger cards is the  2013 Panini Elite , which sells for nearly $100 with autographed versions valued at $325.

Because Bellinger was not considered a top prospect at the time, his major prospect and insert cards were slow to roll out.  Topps got into the act with 2015 Bowman Chrome Autographed cards. One of the more sought-after Bellinger cards to date, the Chrome Autograph  is selling for $400, while rare Blue Refractor versions — limited to a print run of 50 — sell for $1,200.  His 2016 Bowman Chrome Scout’s Prospect card is popular among first card/rookie collectors, selling for a much more affordable $10.

Bellinger has already hit two home runs in a single game six times, breaking Mike Piazza’s Dodgers rookie record for most multi-homer games in a season.  As the records mount, expect interest in Bellinger cards to increase.  His first official rookie card has yet to be released, but expect a wide-range of Bellinger RCs to be issued in the coming weeks.