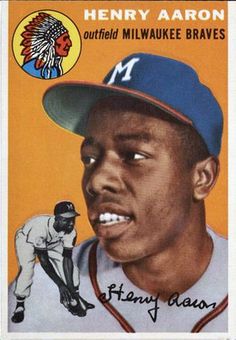 On April 8, 1974, Hank Aaron smacked an Al Downing fastball over the leap of Dodgers left fielder Bill Buckner for his 715th home run at Atlanta Stadium, breaking the record held by Babe Ruth for over 50 years. The night of April 8, 1974 still hails as one of the most iconic moments in baseball history. The celebration of Aaron’s accomplishment combined with new-found appreciation for home run hitters from a previous, untainted era has increased interest in Aaron baseball cards.

The 1954 Topps Aaron rookie pictures a raw teenager on the verge of greatness. The card design sports two pictures, a large headshot and a small in-action shot in the lower left-hand corner. Hard to find in mint condition due to wear, dullness, blurry lettering and off-centered photos, near-mint PSA-7 versions sell in the $2,400 range. 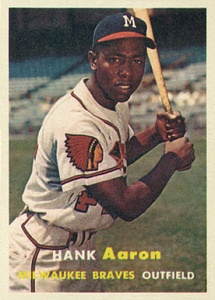 The slender 180-lb. outfielder would go on to hit an unblemished 755 home runs over his 23-year career. A right-handed hitter with remarkably powerful wrists and a smoothly crafted swing, Aaron was recognized for home runs, but his legacy included 3,771 hits (third all-time), 2,174 runs (tied for second), 2,297 RBI (first), and a career .305 average. Aaron also displayed outstanding speed and one of the better right-field arms of his time.

Topps, a chewing gum producer new to the trading card business, made a wide array of printing and production gaffes while Aaron was emerging as the game’s top slugger. After just a few years of producing baseball cards, Topps had yet to establish much of a photo library, so pictures were often recycled during the ’50s. The same Aaron head shot was used from 1954-1956.

Topps made an even bigger blunder on Aaron’s card the following year. The production staff accidentally reversed the negative on the 1957 card (#20), which displays baseball’s most prolific right-handed hitter batting left-handed. The card that has no-doubt triggered decades of bar room arguments sells for $100 in excellent condition.

The 1958 Topps “Baseball Thrills” card, picturing Aaron’s classic home run swing, celebrates Aaron’s Game 4 homer that helped propel the Braves over the Yankees to win the 1957 World Series. This Topps set is notorious for being mis-cut and off center. The rare gem is worth up to $125.

The ultra conservative Topps Co. rolled the dice in 1974 by printing “New All-Time Home Run King” on Aaron’s 1974 Topps card (#1) despite Aaron entering the ’74 season one home run shy of tying Ruth’s career mark. Fortunately for Topps, Aaron kept the suspense to a minimum, hitting a homerun on Opening Day. The ’74 Topps card became officially accurate a few days later when Aaron broke the record on a nationally televised Monday Night Baseball game with a homer against the Dodgers.