When Fleer entered the baseball card business 58 years ago, the first-year sports card manufacturer turned to the greatest hitter who ever lived.  Ted Williams not only established new slugging standards, he also changed the way the sports collectibles hobby was marketed.

During this era, Topps was the exclusive baseball card manufacturer, so Fleer — the only other major trading card producer at the time — had to take a more creative approach with its products. Facing the daunting task of going head to head with the mighty Topps Co., Fleer, a longtime bublegum manufacturer, signed Ted Williams away from Topps. The result was 1959 Fleer “Life of Ted Williams” — an 80-card series capturing a medley of snippets detailing Williams’s legendary career.

One of the more popular cards of the set (#2) pictures Ted in his Red Sox uniform gripping a bat with his idol, Babe Ruth. The card back chronicles Ted’s time at Horace Mann Junior High School in California. Card #5 details Ted’s brilliant high school career for Herbert Hoover High School (San Diego, California). He was considered one of the top amateur players in California, drawing the attention of big league scouts.

Card #14 highlights his amazing rookie season (1939) in which he became the first AL rookie to lead the league in total bases. A favorite among collectors is card #41, which displays a head shot of Williams above the title “1941 — How Ted Hit .400”. The card back discusses how Ted played both games of a doubleheader on the last day of the season to raise his average from .400 to .406.

The Fleer set also features Ted’s distinguished military career. Card #24 titled “1945 — Sharpshooter” shows a concerned, but anxious Williams taking the Naval eye test. According to the card back, “Navy doctors said that eyesight like Ted’s occurred only six times per thousand persons.”This set includes three of the hobby’s hardest-to-find All-Star cards. Card #34 pictures Williams sliding into second base in the 1947 All-Star Game. The card back details the new runs scored record established by Williams that year.

Card #40 shows Williams crashing against the wall to make a spectacular catch in the 1950 All-Star Game at Comiskey Park. The card back tells the story of how the catch destroyed the Red Sox Pennant hopes and nearly ended Ted’s career. Williams didn’t realize that he had broken his elbow and gamely played for 8 more innings, hitting a single and driving in a run. 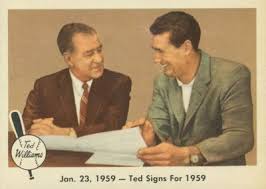 ry member of the AL team at the 1953 All-Star Game in Cincinnati while still serving on military duty. The card back expressively reads, “Not only was he a baseball hero of the finest magnitude, but he was in two wars within the short span of one decade.”

The Williams set successfully put Fleer on the sports collectibles map, but not without incident. Card #68 pictures Ted preparing to sign a contract with Red Sox general manager Bucky Harris, who was one of the handful of baseball executives under contract with Topps at the time. Rather than face a lawsuit from T

opps, Fleer withdrew card #68 by defacing the lower right corner of the card on the printing sheet, and then destroying the cards after they were cut from the sheet. A very limited amount of mint #68 cards were packaged before Fleer started its disfiguring process, making this one of the most sought-after Williams cards.
The back of the Harris card reveals just how much times have changed: “Ted signed his 1959 contract in Boston for a reported $125,000. He has been baseball’s highest paid player for several years.”

This affordable set details the extraordinary career of the legendary Ted Williams. Much of the history written about the Splendid Splinter came directly from the backs of these cards. Every card — except the Harris card, which commands $1,000 — can be found on eBay in decent condition
for under $25.