Drawing comparisons to Red Sox greats past and present, Andrew Benintendi enters the 2017 season as baseball’s top prospect and a hobby treasure.  The 22-year-old outfielder arrived in the majors just a year after being taken with the No. 7 overall pick in the 2015 MLB Draft. He instantly impressed with spectacular all-around play and remarkable poise during the Red
Sox run to the AL East Division Title.

After dominating every level of the minor leagues and forcing his way onto the Red Sox everyday lineup, Benintendi became an instant hit with baseball card collectors.  His first big-time baseball card, the 2015 Bowman Chrome card issued just months after the draft, sells for $6.  Rare purple refractor versions, limited to a production run of 250, sell for $80 and are on the rise.

Benintendi’s timely hitting and outstanding defense quickly caught the attention of collectors throughout the country. Certified autographed versions of the Bowman Chrome purple refractor card gained momentum over the winter and are currently selling for $405.  Because the full-bled, high, gloss photos are susceptible to dings and damaged corners, PSA-10 versions (the highest possible grade) are extremely rare and have sold for $1,400. The paper, smudge-free, non-chrome versions — ideal for in-person autographs — are readily available for $3.

Benintendi looked like a major leaguer from day one, batting .295 with a .835 OPS in limited play cut short by a knee injury.  With his rookie status still intact after a 34-game introduction to the majors last season, Benintendi looks to become the first Red Sox Rookie of the Year since Dustin Pedroia in 2007.   Benintendi’s true rookie card is from 2017 Topps Series 1,which is selling for $3.  Because the 2015 Bowman Chrome card is part of a Prospects subset, it is not considered a rookie card. 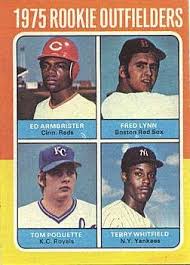 stature like Pedroia and Mookie Betts, Benintendi fits perfectly on the Red Sox undersized, overpowering lineup. The Red Sox are hopeful Benintendi takes a similar career path as Betts by adding strength and home runs to his repertoire in year two.  Collectors crave game-used memorabilia cards of baseball’s top sluggers. Playing in Boston heightens Benintendi’s popularity. His 2016 Elite Extra Gold Triple Jersey card is available for $15 for the time being.

Benintendi reminds veteran Red Sox fans of Fred Lynn circa 1975.  He has the same smooth, graceful lefthanded swing as Lynn, the first player to take AL Rookie of the Year and MVP honors in the same season.  Like Lynn, Benintendi has the ability to wrap the ball around Pesky’s Pole and drive the ball off and over the leftfield wall.  The Red Sox would be thrilled if Benintendi approaches Lynn’s rookie season production when the 23-year-old centerfielder hit .331 with 21 homers, 105 RBI and slugged .566.  Lynn’s rookie card is a highlight of the 1975 Topps set.  The not-so-pleasant on the eyes orange and yellow framed card is a nice addition to a
ny Red Sox collection for under $10.

Benintendi put himself on the baseball map by hitting .564 with 12 homers and 57 RBI in his senior year at Madeira High School (Ohio).  After being named the ABCA/Rawlings National High School Player of the Year, Benintendi  was drafted by the Cincinnati Reds in the 31st round of the 2013 MLB Draft, but opted to refine his baseball skills at the University of Arkansas.  As sophomore with the Razorbacks, Benintendi led the Southeast Conference in batting (.380), home runs (19), and slugging (.715) en route to being named the Baseball America College Player of the Year and receiving the Golden Spikes Award as college baseball’s most valuable player.

Highlights from Benintendi’s college career are captured in the 2015 Panini Contenders set.  Action shots of Benintendi in his Razorbacks uniform are available for under $4 with game-used jersey cards selling for $15 and are on the  rise.  Certified autographed Panini Contenders cards of Benintendi in his college uniform is selling for $60, while limited versions serial numbered to 23 sell for $190 on eBay.