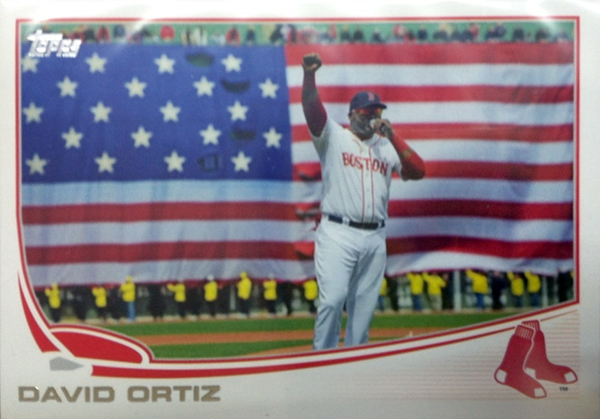 Since joining the Red Sox 13 years ago, David Ortiz has become the face of the franchise, leading the team to three World Series championships while becoming just the 27th member of baseball’s exclusive 500 home run club. On the verge of retirement, Ortiz has become increasingly popular among baseball card collectors. A wide-range of Ortiz variation, rookie, game-used-memorabilia, and autographed baseball cards have been heating up the hobby since the start of the 2016 season, but for the people of Boston there is one card that stands out from the  others.

Some of the most memorable and coveted baseball cards are the ones that capture a unique moment in baseball or a city’s history. The extremely limited variation of Ortiz’s 2013 second series Topps card captures one of the more emotional moments in the Boston sports history.  A defiant Ortiz took the field just five days after the tragic Boston Marathon bombing, making an impassioned, heartfelt speech declaring the city’s resolve.

Known in collectible circles as the “Boston Strong” card, Ortiz is pictured with a microphone in one hand and a clenched fist raised to the heavens with the other in front of giant American flag draped over Fenway’s left field wall, creating a uniquely patriotic background. Upon release, the short-printed “Boston Strong” card sold in the $50-$75 range. Following the Red Sox third World Series title in 10 years later that season, the card was selling in excess of $150. With the Big Papi Farewell Tour in full swing, the card is currently selling for as much as $200.