On New Year’s Eve 1972, the world lost a Hall of Fame baseball player and a great humanitarian.  Thirty-eight-year-old Roberto Clemente, revered as a national hero in Puerto Rico, was leading a relief aid team flying supplies to earthquake-ravaged Nicaragua when the small aircraft exploded and crashed into the ocean shortly after takeoff.

Clemente’s untimely death occurred just a few months after he recorded his 3,000th career hit and prompted a special election that made the Pittsburgh Pirates great baseball’s first Hispanic Hall of Famer.  At the time, Clemente was just the 11th man in baseball history to achieve 3,000 hits and his lifetime batting average of .317 was the highest among active players.

Clemente used a unique inside-out swing to produce four batting titles, a 1966 National League MVP, and 15 All-Star invitations.  Quick, powerful — almost Hank Aaron-like — wrists allowed Clemente to stand away from the plate and drive the ball with ferocity to all fields.  He also lead t
he Pirates to World Series Championships in 1960 and 1971, when he was named the Series MVP.

He got the most from his 5’-11”, 180-pound frame offensively and defensively.  Most baseball experts and historians still regard Clemente as the best right fielder in baseball history.  He patrolled Pittsburgh’s spacious Forbes Field for most of his career with speed and grace, earning 12 Gold Gloves and comparisons to Willie Mays as a defensive player.  A strong and remarkably accurate arm kept base runners at bay. 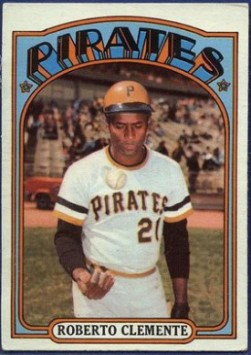 Clemente was recruited by relief organizations to organize relief efforts from Puerto Rico.  He not only organized the efforts, but played a large role in gathering the goods and loading the plane.  He was on aboard the plane because many people thought the relief supplies were falling in the hands of profiteers.  Clemente wanted to ensure that people in need were receiving the goods.  The plane carrying a crew of three and Clemente crashed in heavy seas just under two miles from shore.

Clemente’s professional career started on the West Coast and if the Brooklyn Dodgers weren’t so careless, history may have been different.  The Dodgers originally signed Clemente out of high school with a deal that included a $10,000 bonus.  In 1954, his first season as a professional baseball player, Clemente played for the Dodgers’ minor league affiliate in Montreal.

Per rule of professional baseball at the time, all players signed for more than $4,000 had to be placed on the major league roster after one year of minor league service.  Any player not added to the roster could be signed by any other club for $4,000.  Instead of adding him to the roster, the Dodgers tried to hide Clemente in Montreal by not playing him.  Obviously, a player of Clemente’s talent could not be hidden.  He was scooped up by the Pirates for $4,000, making him one of the best bargains in baseball history.

In 1955, Topps issued the first Roberto Clemente baseball card. The colorful horizontal cards featuring portrait and action photos along with the team logo in the upper right-hand corner are considered one of the best-looking  sets ever produced.  Kudos to Topps for producing a card of a top prospect with no major league experience — a rarity in those days.  The final card featuring Clemente as a player, was featured in the colorful 1972 Topps set.