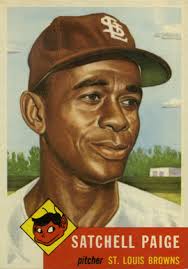 Baseball legend Satchel Paige was born on this day in 1906. Forty-five years ago this month, Baseball Commissioner Bowie Kuhn announced that former Negro League players will have a separate wing in the Hall of Fame. Not surprisingly, Kuhn’s separate, but equal Hall of Fame policy did not set well with the American public, particularly baseball players from the pre-segregation era.

Paige and Ted Williams were among the most vocal former players. Paige was famously quoted: “I was just as good as the white boys. I ain’t going in the back door of the Hall of Fame.”

Williams, in his 1966 HOF acceptance speech, urged Major League Baseball and the Hall to open the doors to Negro League stars, referencing Paige, Willie Mays and Josh Gibson among others.

On July 6, 1971 — five months after Kuhn’s backward-thinking-policy was announced — MLB and the HOF succumbed to public pressure and opened the doors to Paige with full HOF membership, which cleared the way other Negro League stars in the years to follow.

Paige’s 2004 Leaf Certified Materials Game Used Jersey cards are some of the most overlooked memorabilia cards ever produced.  He spent 22 seasons dominating the Negro Leagues and six years in the majors before being enshrined in the Hall of Fame in 1971. There were several versions of Paige’s first memorabilia cards issued in Leaf Certified’s “Mirror Materials” parallel set and the tiered “Fabric of the Game” insert set — all limited to a production run of 100 and selling for over $100.

Paige threw a remarkable 55 no-hitters during his Negro League career, becoming the league’s most popular and recognizable player, not to mention its largest gate attraction. He joined the major leagues in 1948, helping the Cleveland Indians win the World Series as a “rookie.”

In 1965, at the age of 59, nearly 12 years since he last pitched in the majors, Paige pitched one game for the Kansas City A’s, pitching three shutout innings. Three years later, he was a coach for the Atlanta Braves, where he wore the jersey Donruss officials used to incorporate into 2004 Leaf Certified Materials.

Known for longevity and age as a major leaguer, Paige was a Negro League legend in his younger days. At a time when African-Americans were barred from the majors, Paige drew huge crowds of black and white baseball fans. He led the Pittsburgh Crawfords to top billing in the Negro Leagues as a fireballer in the early ’30s and did the same for the Kansas City Monarchs in the early ’40s as finesse pitcher.

Barred from the majors, Paige was often tempted to jump from team to team to earn a decent wage. In 1937, he joined a large group of Negro Leaguers traveling to the Dominican Republic to play for a team owned by Dominican president Rafael L. Trujillo. The following season, Paige hurt his arm pitching in the Mexican League, but quickly transformed from a “thrower“ to a “pitcher.” He returned to the states using guile and control in leading the Monarchs to four consecutive pennants before entering the majors.

The first of just a few Paige baseball cards was issued by Topps in 1953 (#220). A headshot captured the 47-year-old reliever in his St. Louis Browns uniform. Unfortunately, the Topps spelling of “Satchell” was incorrect and never corrected. The card was issued following a 12-10 season with a 3.07 ERA. Paige’s ’53 Topps card is selling for $350 online in decent condition.