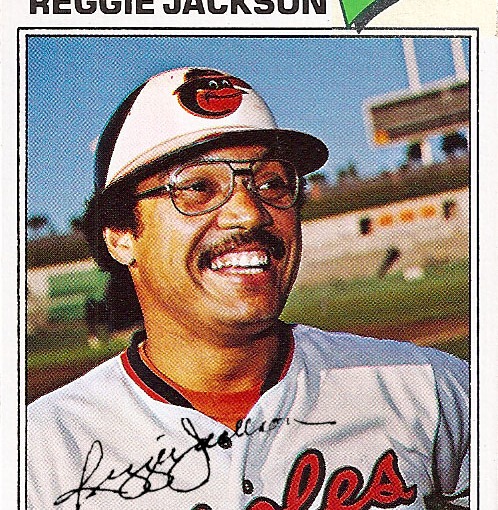 Remember Reggie Jackson’s only uneventful season from the 1970s, the year he he played for the Baltimore Orioles? A lost season for Jackson, completely ignored by Topps … almost!?! Say what?  First some background information …

On this day 40 years ago (April 2, 1976), Oakland A’s owner Charlie Finley shocked the baseball world by trading Jackson to the Orioles. Knowing he did not have the money re-sign the pending free agent after the season, Finley sent Jackson and left-handed starter Ken Holtzman to the Orioles for outfielder Don Baylor and right-handed pitchers Mike Torrez and Paul Mitchell. Shocked by the transaction and not thrilled with his salary situation, Jackson refused to report to Baltimore until the Orioles increased his salary from $165,000 to $200,000. As a result of the dispute, Jackson missed the first 16 games of the season.

Seeking the limelight, Jackson did not enjoy his brief time in Baltimore. From 1971-1982, Jackson’s teams made the playoffs 10 of 12 times with one of the exceptions being the year he spent wearing an Orioles uniform and batted .277-27-91.

If you’re using your old baseball card sets to chronicle baseball history, you might think that 1976 was a lost season for Jackson; that his time in Baltimore never actually happened. As soon as Jackson signed with the Yankees prior to the 1977 season, Topps quickly airbrushed the original photo, covering the Orioles home uniform and multi-colored hat with Yankee pinstripes and traditional cap. If you look closely, you will see that the colors are rather dull, not the traditional Yankees colors. The card also pictures the green and gold sleeve of a former A’s teammate over Jackson’s shoulder. Jackson’s first official Yankees card (#10) became a key part of the 1977 Topps set and currently sells for $8 in mint condition.

Jackson never “officially” appeared on an Orioles card, however a few original blank-backed proof cards escaped the Topps shredders and found their way into the mark 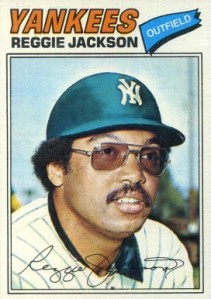 etplace. Because of its scarcity and Jackson’s October heroics, this proof card has become one of hobby’s most sought-after commodities. The proof card does not have a facsimile autograph commonly featured on ’77 Topps cards.

According to published reports, television commentator,/baseball historian/hobbyist Keith Olbermann owns two versions of this almost singular collectible. One is an actual card, the other is part of an uncut proof sheet that he purchased at a 1989 Topps/Guernsey’s auction for an undisclosed price.

Although Jackson played the 1976 season with the Orioles, he is pictured in an Oakland A’s uniform because Topps did not have time to doctor the photo before the series was released. Later that season, Star Co. finally released a card with Jackson wearing an Orioles uniform. Nearly a decade later Upper Deck released the first memorabilia cards sporting Jackson in an Orioles uniform.