New Red Sox president/GM/baseball czar Dave Dombrowski is bold, decisive, and clearly the man running the show.  By signing left-handed ace David Price to a seven-year, $217 million contract, Dombrowski was able to persuade owner John Henry to make a complete philosophical change in how to build a baseball team while laying the groundwork for the next Red Sox championship run. 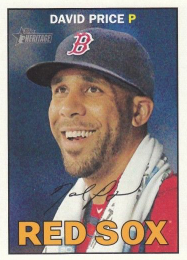 Last offseason, Jon Lester took his two World Series rings and boto Chicago after Henry told the world that spending lavishly on a 30-year-old pitcher was not sound business.  Today, the 30-year-old Price is on the verge of becoming the highest paid pitcher in the history of baseball.

Dombrowski has been preaching the need for an ace since he landed at Logan
Airport wearing Red Sox gear.  Henry opened his wallet and Dombrowski has his man.  Price is a bonafide, card-carrying, innings eating front of the rotation ace — arguably one of the game’s top five pitchers.  His resume includes a Cy Young Award and two runner-up finishes to go along with two ERA titles.  A true workhorse, he ranks fourth in the majors in innings and strikeouts, and third in wins since his first full season in 2010.  He was arguably the AL’s best starter in 2015.

The Red Sox get Price at the peak of his career and durability has not been an issue He has only one minor injury in his career, sitting out six weeks in 2013 because of a sore triceps.  He’s also been transitioning from a power thrower to a more complete pitcher over the last few seasons.  While maintaining a mid-90s fastball, Price has become more reliant on curveballs and changeups, which accounted for 25% of his pitches last season.  Not having to rely on the heat pitch after pitch will limit the wear and tear on his arm.

Price has also had tremendous success against stacked AL East lineups of recent years past and is 6-1 with a 1.95 ERA at Fenway Park over his eight-year career.  With the best defensive outfield in the league covering his back, Price has positioned himself well for continued success.

The one drawback?  And it’s a big one:  Price is 0-7 as a starter in his playoff career with a 5.27 ERA.  At $31 million annually, the man signing the checks and the win-at-all-costs fan base will  have much higher expectations over the next seven years.    Clayton Kershaw, the game’s top pitcher is also trying to figure out the winning formula for October. Both have been consistently strong early and late in seasons. Both are accustomed to performing in the spotlight. Both are aces instrumental in getting their teams to the playoffs.  I’m guessing that both will figure out how to win in the postseason with age and experience.

A bigger concern may be the opt out clause that will allow Price to enter the free agent market again in three years.  If Price performs as expected, the Red Sox will likely have to shell out even more money to retain Price or explore other pitching options.  In short, we may be looking at a three-year, $93 million contract.  A  World Series title or two in that time period would satisfy everyone.