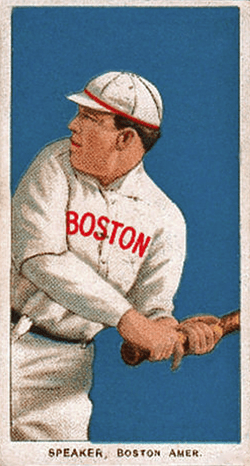 Tris Speaker was one of the most prolific and underappreciated players in Red Sox history.  Playing in the shadows of Ty Cobb during baseball’s “Dead Ball Era”, Speaker led the Red Sox to World Series championships in 1912 and 1915 and the Indians in 1920 as a player/manager.  The “Grey Eagle” hit for high average, power, and production while establishing the standard for center field defense.

From deep in the batter’s box, the crouching Speaker held the bat at the hip to ensure greater contact.  He struck out just 220 times during his 22-year career that included 3,514 career hits.  Speaker displayed the strength to hit line drives into the gaps and down both lines, accounting for his still-standing major league record of 792 career doubles.  Speaker batted higher than .350 nine times and higher than .380 five times en route to a .345 career batting average.

Despite the lofty batting statistics, Speaker won just one batting title courtesy of playing in the same era as Cobb, who won 12 batting titles and compiled a .366 career batting average.  Like his career accomplishments, Speaker’s baseball cards pale in comparison to Cobb’s, but are quite impressive in their own right.  Most baseball historians and vintage card collectors consider the 1909-1911 T206 card to be Speaker’s rookie.  The card displays Speaker on the verge of making contact from his unique batting stance.  Decent graded versions sell for as much as $7,500.

The original T206 baseball cards were issued in cigarette and loose tobacco packs through 16 different brands owned by the American Tobacco Co., including the “Ty Cobb” brand.  The set includes the T206 Honus Wagner card, the most valuable and coveted card ever produced.  One of the largest pre-World War I sets ever produced, the series also includes Hall of Famers Speaker, Cobb, Nap Lajoie, Cy Young, Walter Johnson and Christy Mathewson.

Speed and defense also contributed to Speaker’s Hall of Fame career.  He stole 436 bases and hit 222 triples (fifth on the all-time list) during his career.  Speaker is considered the best center fielder of his time and one of the best ever.  Playing in an era when long drives were rare, Speaker played extremely shallow — practically positioned as a fifth infielder — to cut down would be singles and bloop hits.  His trademark play was racing to second base behind a confused or unsuspecting runner for a pick off play.  Speaker is still the all-time leader in putouts and double plays for his position.  He also recorded a record-tying 35 assists for the Red Sox in 1909 and 1912.

The majority of Speaker baseball cards display portrait or batting stance photos.  However, the 1927 Exhibits card is one of the few that feature Speaker in action defensively.  The photo shows Speaker as he awaits a throw, perhaps playing first base.  The 63-card 1927 Exhibit Baseball Set featured a green hue of the black and white images on each card front — a relatively new and unique printing method for the time.  Ungraded versions sell in the $125-$175 range.

Speaker’s unconventional path to centerfield started at a young age. After suffering two broken arms as a teenager, he taught himself to throw right handed.  Despite throwing with his non-dominant arm, Speaker tried to break into professional baseball as a  pitcher.  After being turned down by New York Giants manager John McGraw for a tryout as a pitcher, Speaker went to the Texas League to learn centerfield with the Cleburne Railroaders in his native Texas.

A year later, he was purchased by the Boston Americans (later Red Sox) and became the regular centerfielder, playing alongside Hall of Famer Harry Hooper and defensive whiz Duffy Lewis to form the “Golden Outfield,” which was widely considered one of the best outfields in baseball history.

One of Speaker’s earliest cards with the Red Sox is from the 1910-1911 M116 Sporting Life series.  A four cent investment would get readers of the Sporting Life newspaper a dozen sports cards.  Speaker’s card features a colorized portrait displaying his Red Sox baseball jersey.  Highly graded versions sell in excess of $5,900.

The second part of a semi-regular series on “Baseball’s Most Unbreakable Records”.

Sometimes baseball’s most unbreakable records need to be framed in the proper context.  Sometimes luck or fate has more affect on the baseball record book than we realize.

Sox Hall of Fame outfielder from the deadball era did something nearly as remarkable — some might say even more remarkable.

In 1912, Speaker had hitting streaks of 20 games or more three different times — “a feat not even the great DiMaggio could ever duplicate”, wrote Timothy Gray, author of the fascinating and meticulously researched book Tris Speaker: A Rough and Tumble Life of a Baseball Legend. Gay cited research done by dead-ball era historian Dan Holmes, who maintains Speaker came within an “eyelash or two” of a 70-game (or more) hitting streak. From May 27 – August 14, Speaker played in 78 games and collected a hit in all but four of them.  A scratch hit here, a wind-blown double there and we may be looking at the baseball record book from a different perspective.

1912 was a great season for Speaker and the Red Sox. Celebrating the opening of Fenway Park, Speaker earned the American League MVP award and led the Red Sox to a World Series title over the Christy Mathewson and the New York Giants. Speaker, an exceptional contact hitter who could drive the ball to the gaps, flirted with .400 for much of the season before finishing with .383 batting average. He led the league in doubles with 53 and home runs with 10.

Running neck and neck with Ty Cobb as the greatest fielder of the time period, the man they called “Spoke” established a record for outfield assist that season with 35 — an amazing accomplishment that has never been equalled. Speaker, renowned for playing a shallow centerfield — and by shallow, historians say he positioned himself just behind second base — also led the league “by engineering nine catch-and-throw double plays” that season, according to Gay’s book.